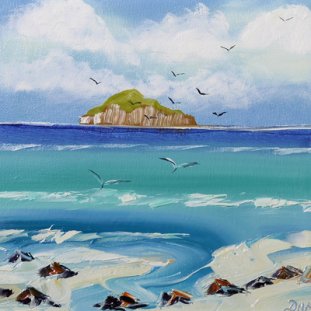 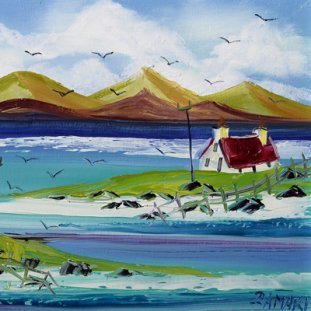 …were all interested and involved in art in its many forms both in Scotland and in his native Italy. His father in particular, was an accomplished artist and instilled the love of art in John from the age of seven.
Sir John takes his influences from his love of nature and the outdoors – the ruggedness and majesty of the mountains and the calmness of the sea along the coastline of Western Scotland and its islands. The strength of character of the local people in the remote settings also encourages his passion for areas of mid Argyll, the Hebridean Islands and Northumberland.
His love of Italy is inspired by the warmth of the landscapes and charismatic nature of the people, and, in particular, his attraction to the Tuscan region with its rolling poppy fields which he has observed first hand and from photographs taken whilst travelling there. The ancient eternal city of Rome also inspires Sir John from its beauty and architecture to its sense of belonging within the history of the world.
Sir John’s trademark use of the palette knife, combined with vibrant colours, captures the feeling and atmosphere of his subject matter and inspires reaction in his viewers.
Sir John’s work is available as original work, commissioned work, museum quality limited edition prints limited to a maximum of 95, all of which comes with signed certificates of authenticity.
Additional commissioned works are undertaken for high quality gold leaf gilding and gold leaf heraldic coat of arms gilding.
The most recent examples of heraldic coat of arms gilding are in progress at various rooms of Chillingham Castle, Northhumberland for Sir Humphery and Lady Wakefield.
Sir John contributions to charities is quite prolific over the last few decades supporting many charities ranging from the Red Cross to the Malawi Appeal. His many generous donations have helped the lives of the young and vulnerable both here and abroad. In order to encourage the arts in young people, Sir John has made many donations to schools, children’s wards in hospitals, also Universities and churches in the United Kingdom and many, many other charities both in the U.K. and abroad.
Sir John will be exhibiting his work for charity exhibitions throughout the year.
Sir John’s vibrant use of oil and bright colour is his trademark in his work in fine art.