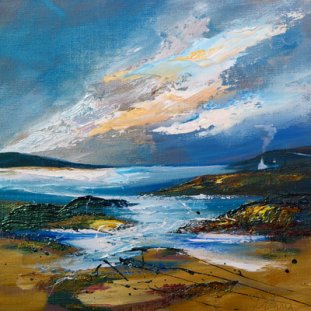 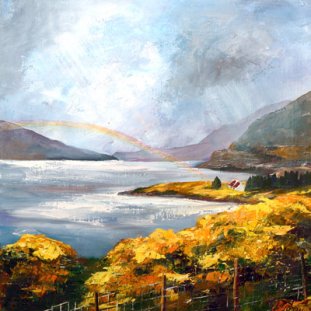 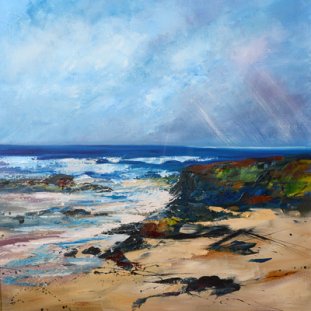 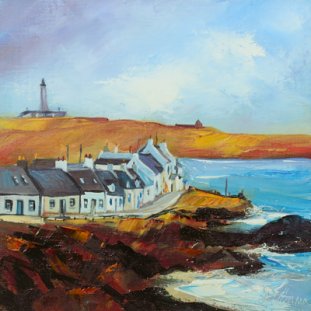 Glasgow born, Dronma studied at Laurel Bank and then Glasgow School of Art, where she…

…..graduated in 1969.
After studies at Jordanhill College of Education, and a period of teaching she became the Art Director of Glasgow Arts Centre. Eventually she moved to rural Stirlingshire while she was bringing up her family.
Until April 2008 Dronma was a part time lecturer at Forth Valley College. She now devotes her time fully to her painting, and is President of the Glasgow Society of Women Artists (GSWA). Awarded Scottish Amicable Award 2007 125th Anniversary Exhibition. Her paintings have gained her a fine reputation amongst discerning buyers of contemporary Scottish Art, as a “New Scottish Colourist”. Her expressive landscapes may be wild and windswept, but they also gleam with an inner light.Her work has been exhibited all over the United Kingdom, and are in private collections world-wide. In 2008 she took part in the Primavera Art Rotterdam, and also exhibited in Vienna. Dronma’s work is also in a private collection in Delhi.Her unusual name is her Tibetan Buddhist name, since becoming a Tibetan Buddhist in 1976.
I love the changing moods of light, colour and atmosphere, and I am fascinated with the vibrancy of change, the point of “in-between” .