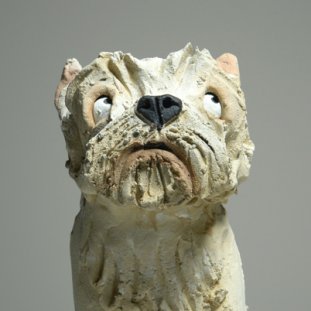 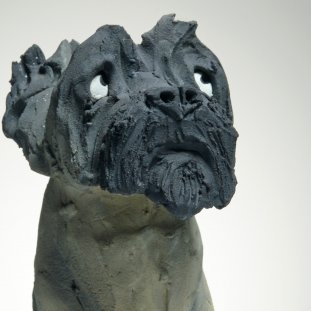 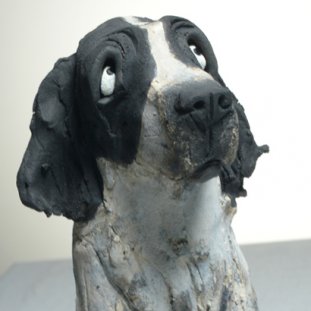 I graduated from Manchester Metropolitan University in 1999 with a first class honours degree in Contemporary Craft, I specialised in…

…ceramic sculpture and printed textiles. I set up in business straight away and in 2001 my first solo exhibition and also my first site specific installation at the City Galleries Leicester entitled Elvis the Whippet’s salon took place, another followed in 2003 at Mima, Middlesborough (Operation Jumpsuit) and Libre les Grenouilles was shown at the Craft Council Gallery shop, London in 2004. Alongside these I have had many shows including Stephanie Hoppen and Medici gallery in London and to this day regularly supply sculptures to galleries such as the Old Courthouse in Ambleside and Fenwick Gallery in Northumberland.

In 2010 I was commissioned by Stockport Art Gallery to come up with another installation idea and Reggie’s Roller Palace was born, a vintage take on the modern culture of celebrity seen through the eyes of an ageing rat. A mini version was taken that Summer to the vintage festival at Goodwood and I also completed my first solo show of oil paintings that year at the Dean Clough Galleries in Halifax which I was immensely proud of.

Reggies Roller Palace caught the eye of the Centre for the Applied Arts in Ruthin, Wales and was reworked and reborn in 2011. It was a long held ambition to have an exhibition there and to have a solo show taking up the entire gallery was a dream fulfilled. I have always been immensley grateful to the Arts Council for their support in the installations I have created.

2012 saw the birth of my first daughter and with the demands of motherhood came the need to ditch intensive exhibitions and concentrate on the bread and butter of my business which is private commissions. I have made this my sole focus of my practice over the last few years and my one yearly retail show – Crufts dog show is now my main selling event.

My second daughter was born in 2016 and in 2017 my 1st daughter started school and so a new adventure has begun! feeling a little dismayed at the way creativity has been gradually squeezed out to the very boundaries of education I have set up an after school creative club to try and redress the balance in a small way, you can read more about it in the education section.